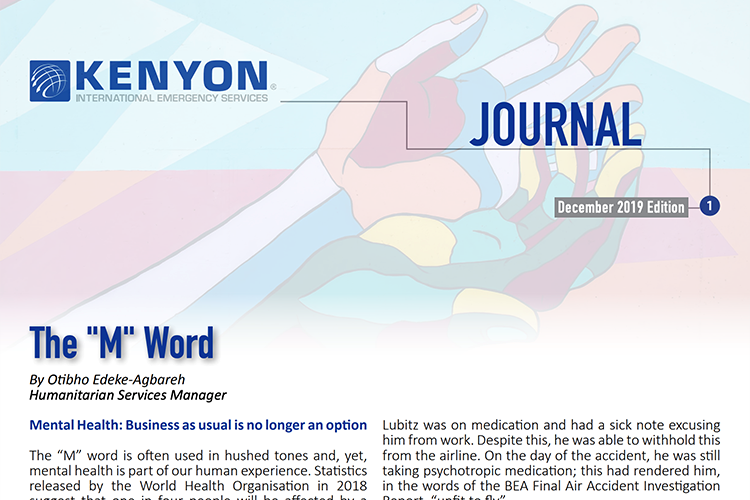 Mental Health: Business as usual is no longer an option

The “M” word is often used in hushed tones and, yet, mental health is part of our human experience. Statistics released by the World Health Organisation in 2018 suggest that one in four people will be affected by a mental health issue at some point in their lives. So why does it continue to hold so much stigma?

Historically, people with mental health issues have been marginalised. Trend analysis over 25 years depicts a complex picture of attitudes; this has not entirely been positive. What is clear, however, is that public awareness, education and access to mental health support can positively contribute to debunking myths, alleviate the stigma and empower people to make healthy decisions regarding their mental health.

Incidents involving mental health that received wide international media coverage have raised public consciousness, opening up a forum for debate and, most importantly, helping to drive change. This could not be truer than with the 2015 Germanwings incident when the aircraft’s co-pilot deliberately crashed the plane into the Alps, resulting in 150 deaths. Given the understandable public concern, this propelled mental health to the top of the aviation community’s agenda.

The Germanwings crash was not the first time an incident of this nature had occurred, but what set this crash apart was that co-pilot Lubitz had been suffering from psychiatric issues for many years. The process for medical certification of pilots, in particular self reporting in cases of a decrease in medical fitness between periodic medical evaluations, had inadvertently created the perfect storm.

Lubitz was on medication and had a sick note excusing him from work. Despite this, he was able to withhold this from the airline. On the day of the accident, he was still taking psychotropic medication; this had rendered him, in the words of the BEA Final Air Accident Investigation Report, “unfit to fly”.

So how did the aviation industry change to mitigate the risk of this happening again? Immediately after the crash, countries such as Australia, Canada, Germany and the UK brought out new rules requiring two members of flight crew to be in the cockpit at all times. This was a good start, but it treated the symptoms and did not address the issue.

For this issue to be properly addressed, the aviation industry needed to close a number of gaps in the provision of mental health support. The EU Commission issued Regulation 2018/1042 on 25 July 2018, mandating a new set of safety rules on air operations, including provision of mental support for aircrew to be delivered in a more holistic fashion. The EU has provided a two-year window for commercial air transport operators and member states to prepare for the new regulations to allow sufficient time to set up the appropriate infrastructure ahead of full enforcement of the Regulation from 14 August 2020.

2. Performing systematic alcohol testing: Alongside drug testing, EU and foreign airlines will also be expected to fully cooperate and comply with alcohol testing as part of the Ramp Inspection Programme.

3. Support programme: All pilots and aircrew working for an EU member airline must have access to a support programme which is confidential and can be freely accessed.

In support of the regulation, EASA issued Air Ops Implementing Rules in the updated Part-MED Guidelines on 28 January 2019, stipulating the need for corrective and follow-up measures and revalidation or renewal.

Guidelines such as these make the provision of mental health support programmes for aircrew the responsibility of air operators. The key to implementing these guidelines is to sufficiently educate employees regarding mental health and the proposed changes, all whilst collecting their opinions on the type of services that would work in practice. Implementing change in this manner will likely expedite a culture change; if you can change mindsets, you can change behaviour.

One of the most important support programmes air operators can provide, therefore, is the provision of mental health support following an incident. The key to success here is to ensure the needs of families, the airline and their own team members are met with due care, diligence and professionalism. This is accomplished by providing a service which is accessible and does not pathologise symptoms but provides interventions that mitigate and normalise an individual’s stress responses to an incident. For instance, following a death on board a flight, where aircrew had actively provided CPR, Kenyon was activated to provide mental health support to the crew via its telephone mental health support line. After regular calls with a qualified mental health team member, all crew members were able to return to work in a safe and timely manner.

As colleagues, family members and friends, it is our individual responsibility to extend compassion and care to those who may be experiencing mental health issues. By choosing to empower such individuals, we can begin to finally dismantle the stigma associated with mental health symptoms and place it in its rightful place, as part of the human experience.