The Indian Ocean Tsunami made landfall on 26th December 2004. It was unprecedented in its scale, destroying parts of Sri Lanka, Indonesia and Thailand and resulting in over 250,000 deaths within the region.

During the summer month of December, Southern Thailand is a popular tourist resort for many Europeans. Approximately 5,000 non-Thai nationals from 30 different nationalities died as a result of the tsunami. As a result of the high number of international deaths over, 30 individual Disaster Victim Identification (DVI) teams were deployed by their National governments. 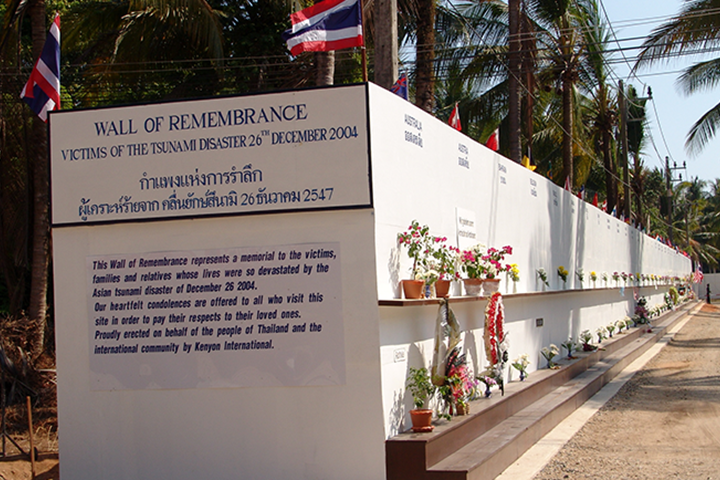 The overall scope of the disaster and the large number of deceased was overwhelming.

There was no data management system within Thailand capable of recording the ante mortem and post mortem information on the deceased.

There was pressure either direct or indirect on the various national DVI teams to expedite the identification of their nationals killed in the incident.

The Thai National Police had 3,737 people officially recorded as missing/deceased.

Over 30 different countries lost citizens as a result of the tsunami.

With the approval and support of the Australian government, Kenyon constructed a ‘Wall of Remembrance’ adjacent to the repatriation centre in Phuket where the families of the victims could gather in memory of their loved ones.

Kenyon teams provided specialist advice on chemical use and personal protective equipment for the response operation.

Kenyon utilised the services of 250 separate personnel over the length of the tsunami deployment. Many of the Kenyon team performed multiple rotations.

Using extensive experience in international repatriations, Kenyon repatriated all Australian deceased (26) who were killed as a result of the Tsunami. Kenyon also repatriated a large number of deceased from other affected countries.

A formal command structure was developed early in the response operation in support of the Thai National Police, comprised of two Kenyon Chiefs of Staff who reported to the Thai Royal National Police. Meetings were conducted with involvement from all affected countries where policy, procedures and day-to-day operations were discussed and implemented. Kenyon provided operational and technical input and support to the management team.

When an operational plan was developed with allocated roles, responsibilities and resources, the scope of the operation became manageable. Operationally, three separate mortuaries were operating to manage the number of recovered deceased. Refrigerated containers were acquired to manage the storage of the deceased. Kenyon provided valuable support with the provision of two mobile mortuaries, equipment, supplies and manpower.

To rectify the incident data management problem, Kenyon provided the Thai National Police a copy of their Plass Data DVI program. The program facilitates the matching of ante mortem and post mortem data. The system was set up in the DVIIMC for the whole operation. Kenyon IT specialists networked computers and assisted other countries with using the system.

Pressure from external bodies is evident when identifications of home nationals is slow. In the early stages of the response, difficulties were experienced with DNA comparisons. A number of changes were made to the deceased sample collection procedures and the DNA analysis. Once the revised procedures were implemented, the pressure on the various national DVI teams was minimised.

Over 90% of the reported missing persons have been positively identified - an outstanding result for an open disaster of this nature.

The Thai authorities, with support from international agencies, have responded to a catastrophic incident in an extremely professional manner, demonstrating respect and compassion to the deceased and their families.

Through the Department of Foreign Affair and Trade, the Australian Government provided outstanding support to the Thai authorities and the international community in their continued support of the response operation.