On the 12th January 2010, a 7.0 earthquake struck Haiti east of the coast, inflicting large loss of life and overall destruction.

The estimated death toll was in excess of 220,000 people. The government of Haiti estimated that over 250,000 residences and 30,000 commercial buildings had collapsed or been severely damaged as a result of the earthquake, leaving over 1,000,000 people homeless.

The Headquarters of the United Nations peacekeeping mission in Haiti, located in Port-au-Prince, collapsed and several other UN facilities were damaged. A number of UN personnel and family members were unaccounted for in the aftermath of the earthquake.

The United Nations began discussions with Kenyon on the 13th January 2010, requesting emergency response assistance regarding the missing UN personnel in Haiti. 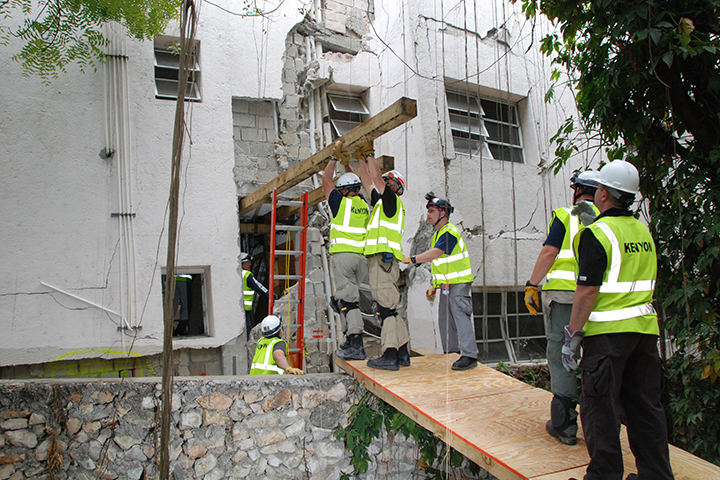 Natural disasters resulting in mass fatalities where numbers of foreign nationals and different agencies are involved can present challenges to those commanding the operation. Anecdotal evidence shows that personal agendas can take precedence over incident agendas.

Due to the overall destruction of Port-au-Prince and surrounding areas, facilities such as transport, mortuary facilities, deceased storage, accommodations, logistics, supplies, etc., were not available.

In an operational situation where there are a number or agencies handling the deceased from the recovery, transportation, storage, post mortem/identification phases and where the deceased are moved from different locations, it is possible to experience a break in chain of custody of the deceased.

A Kenyon first response team was deployed from the United States to Port-au-Prince to assess the response requirements. The team conducted detailed assessments of the affected UN buildings and developed an operational plan, which was submitted to and agreed upon by the UN management.

Kenyon also performed deceased recovery at particular sites at the request of the UN.

The deceased were transported from the refrigerated containers in Port-au-Prince to the Kenyon mortuary in San Domingo where a forensic team conducted a post mortem examination and conducted full forensic identification procedures. All deceased identified by the Kenyon team were identified by fingerprint, dental or DNA comparisons.

Personal effects located on the deceased were cleaned by Kenyon and returned to the victim’s families at the request of the individual families and the UN representatives. Kenyon managed property recovered from the affected UN locations. The items were shipped to the Kenyon facility in the United States where they were cleaned, recorded, itemised and cataloged for family viewing and claim. All unclaimed items were returned to the UN for distribution to the relevant family members.

Once the victims were identified and the families and the UN had been advised, Kenyon managed the repatriation of the deceased from Haiti to the next of kin at their home location.

Kenyon activated its Crisis Management Centre (CMC) in Houston, Texas, US, to support operations in Port-au-Prince and Santo Domingo. The primary roles performed by the CMC included selection and deployment of appropriate Kenyon personnel for the incident response; logistical support with equipment and items not available in Haiti and administration support.

Kenyon carried out comprehensive safety assessments of each of the sites and ensured that the team members followed health and safety procedures and that each team member wore appropriate personal protective equipment at all times.

Kenyon ensured that timely, effective communication and cooperation occurred between Kenyon the United Nations representatives on site and with the other government agencies.

When issues arose from international response teams regarding their foreign nationals in the custody of Kenyon, the matter was brought to the attention of the UN officials for resolution.

There were a total of 51 deceased that could not be associated with the UN contingent. All deceased were buried in a dignified manner in a gravesite arranged by the UN. The burial service was attended by a Catholic priest who performed a burial site blessing. Each of the deceased underwent a full post mortem where DNA samples were collected for subsequent testing and comparison. Kenyon recorded the exact location of each of the deceased for potential interment in the future.

To avoid logistical issues in Port-au-Price and Santo Domingo, Kenyon opened its CMC in Houston to source and transport equipment and items from the US.

All 51 deceased that were not part of the UN missing were treated in the same manner as the UN deceased: with dignity, compassion and respect.

The family members of the UN deceased received confirmation that their loved ones had been positively identified and the remains of the deceased were repatriated to their home countries for interment.

The UN acted in a positive and compassionate manner in engaging the services of an external agency to ensure that their employees, contractors and family members who were injured or deceased were located and cared for.

Kenyon had the operational capacity and capability to provide a specialist disaster response team to focus their skills and expertise on locating, recovering, managing, identifying and repatriating the deceased found at specific locations in the disaster region.