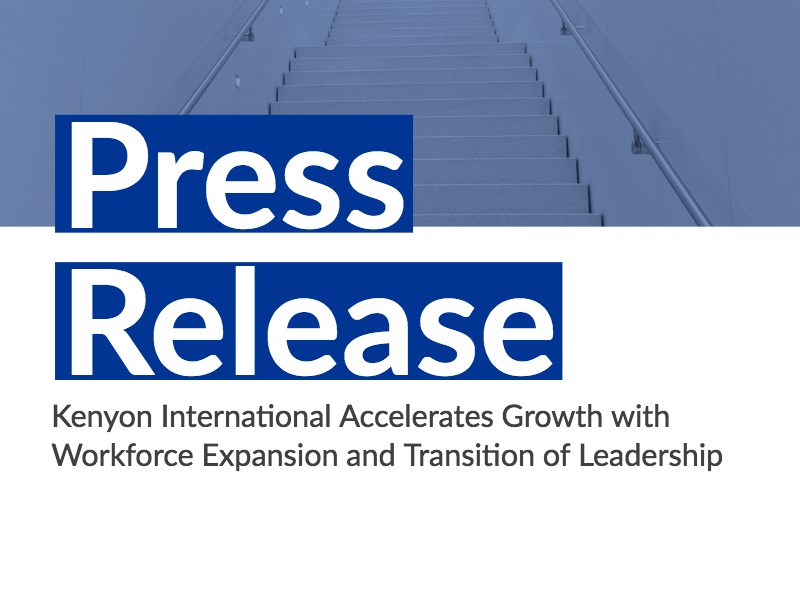 Bracknell, UK, 27 March 2019 –  Kenyon International Emergency Services, the global leader in disaster management, announced earlier this year their plans to invest in staff growth and begin the transition of leadership through the implementation of a long-term success plan. They are pleased to share the following updates to Kenyon’s senior and mid-level management teams, as well as any changes associated with those.

Kenyon CEO Elect and Vice President, Operations Simon Hardern will transition to the role of Chief Executive Officer full-time. Prior to Kenyon, Hardern spent 34 years in active service with Her Majesty’s Armed Forces as a Rear Admiral in the Royal Navy. Since 2004, Hardern has been engaged at the joint service and civilian interface; this included a period of overseeing support to injured military personnel and the families of those killed in action. For much of the past eight years, he worked in high profile appointments in NATO. Since his arrival to Kenyon, he has already taken part in four disaster management incidents.

He is a specialist in the development of strategy, the shaping of coherent policy and the efficient conduct of complex operations. Important for Kenyon, he has a reputation for effective leadership, an energetic spirit, strong planning credentials and the ability to think and act on his feet. Notably, Hardern has gained the respect of others by demonstrating integrity, discretion, and a passion for diversity.

Conor Prendergast will assume the role of Chief Operating Officer. Prendergast has already begun the transition of duties and brings his strong background in the aviation industry, and in management roles in general, to the role. His primary responsibilities include managing the business support services, including administration, accounting, human resources, information technology, facilities, risk/legal management and vendor contracts.

Prendergast joined Kenyon in October 2017 as Vice President, Commercial Services where he supported the Commercial Team in achieving new business while improving workflow processes. In addition to his achievements in Commercial, he managed many corporate-wide projects including GDPR compliance, IT security audits and personnel development.

Kenyon is also pleased to announce the addition of Mark Oliver as Vice President, Operations and Otibho Edeke-Agbareh as Humanitarian Services Manager.

Oliver, a Kenyon Team Member since 2014, will join Kenyon’s leadership team in support of Kenyon’s field operations and services, training and consultancy as well as Team Member management. Prior to joining Kenyon, Oliver spent 30 years in police service. As a Senior Investigating Officer he served mainly in homicide investigation and murder review, serious and organised crime, counter corruption and counter terrorism exercise planning. As a UK DVI Commander, he was the lead Senior Identification Manager for Humberside Police and the North East region and sat on the National Policing Disaster Victim Identification Steering Group.

Oliver was also a member of the team that developed the Dundee Advanced DVI Course. He holds a Post Graduate Certificate with Distinction in DVI. From 2007 to 2014 he developed and contributed to many of the DVI training and operational response plans for the UK, delivering training at all levels with police, local authorities, forensic medical practitioners and Coroners.

Edeke-Agbareh joined Kenyon in August 2018 as the Humanitarian Services Manager. She is responsible for Kenyon’s Disaster Humanitarian Services programme, further developing and maintaining Kenyon’s family assistance services and delivering those services in support of clients. She also provides family assistance training and development for staff, Team Members and clients in the area. Edeke-Agbareh is an occupational therapist by background with over nine years of experience in major trauma/orthopaedics and rehabilitation. She completed an MSc in Global Health and Development at University College London (UCL). Her research findings regarding meeting the needs of people with disabilities in a disaster was accepted by the United Nations (UN) and their review of the UK’s compliance to the UN’s Convention on the Rights of People with Disabilities (UNCRPD).

She is a member of the UK Emergency Medical Team and was deployed with them to Gaza in 2014. Edeke-Agbareh has international humanitarian experience working in places such as Tanzania and Brazil. She is also been a moderator/contributor for World Federation of Occupational Therapist’s online course titled “Disaster Management.”

“Kenyon is consistently advancing to provide the very best in expertise and resources,” Kenyon’s Robert A. Jensen shares. “These recent changes to staff and organisation ensure that Kenyon is well prepared to meet the needs of our clients experiencing crisis for years forward. I look forward to working with the new leadership team in my role as Chairman to further Kenyon’s mission under their management.”

About Kenyon International Emergency Services
Kenyon is the international leader in worldwide disaster management, providing pre-incident crisis planning and post-emergency response services on behalf of many of the world’s foremost companies. Privately owned and with over a hundred years’ experience, it remains the only firm in its business with comprehensive resources and experience in every type of mass fatality accident, including aviation, industrial and natural disasters, war and terror attacks. Headquartered in Houston, Texas, Kenyon has its main operational facility in Bracknell, UK and representation in Sydney, Australia, Santo Domingo, Dominican Republic and Beirut, Lebanon. Learn more at www.KenyonInternational.com.