An international passenger flight departed on a regularly scheduled route when complications occurred as the plane came in for landing that resulted in the aircraft impacting the runway during an attempted go-around. A fuel-fed fire broke out as an engine was ripped off and the plane skidded on its underbelly before coming to a stop. A fuel tank in the centre of the plane subsequently exploded and the fire spread into the airplane cabin.

There were a total of 300 people onboard the aircraft. The quick response of the airline’s crew-members ensured that everyone on board survived the crash, though a small number did sustain minor injuries. 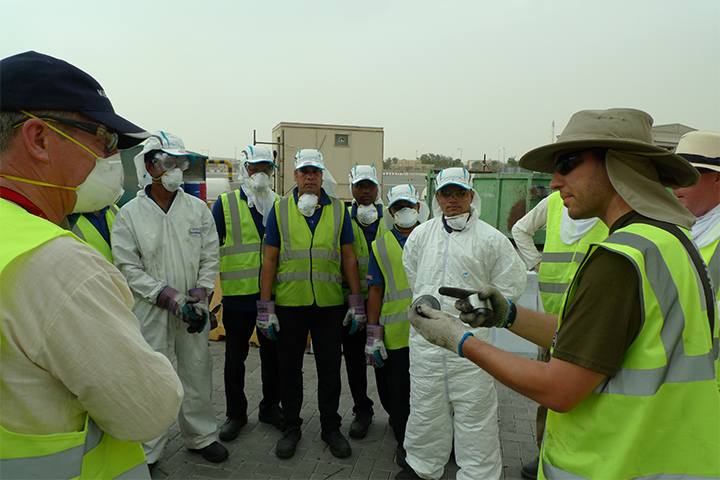 Due to the fire, there was extensive damage to the plane and everything in it. Within the hold of the aircraft, there was a substantial amount of food product that had to be cleared before the personal effects (PE) or the electronics room could be accessed. The damage caused to the plane meant debris had to be cleared by hand until enough space was created for a forklift to remove the pallets and bins containing the food.

The extreme heat at the incident location also proved difficult to work in and meant whoever went in to clear the debris had restricted working hours where they could work for only 20-30 minutes before having a rest and water break. The heat was exacerbated by the need to work in full personal protective equipment (PPE).

Finally, aviation investigators, from multiple organisations, came in to review the incident, but expected to only view the parts and debris directly related to the incident. Coordinating the logistics to quickly sort the debris and personal effects, while maintaining communication between all involved organisations, became critical to the investigation.

Kenyon’s Disaster Recovery Services were activated by the client, a highly respected carrier, to support with the search, recovery and processing of the cargo and personal effects on board the aircraft. Kenyon deployed a team of 16, including PE specialists, all of who were onsite for three weeks. The team worked to clear debris from the plane by hand in order to gain access to an area of the hold that contained the majority of the cargo and PE. As the body of the plane was in sections, Kenyon used a forklift truck to pierce the side of one part of the plane and raise it up enough to open a side door, giving them access to another section of the hold. Aviation investigators were able to quickly and easily access the parts and information needed to complete their investigation. Kenyon recovered and processed over 2,000 items of associated PE and over 1,200 items of unassociated PE, all of which were inventoried and returned to the client, along with a catalogue to be distributed to those involved to facilitate the claims process.

Kenyon was able to act as an objective third party and as a liaison between the client and the aviation investigators sent from the various organisations involved in the incident. This eased the flow of communication between all parties. Kenyon’s assistance with coordinating between the parties also ensured the investigation and the personal effects recovery processes proceeded efficiently and in a safe and timely manner. Kenyon’s support allowed the client to manage the consequences of the incident.